3D printing at its core is defined as a type of manufacturing that occurs when a malleable material is laid down, layer by layer, to produce a three-dimensional object.

3D printing, also known as additive manufacturing, was created by Charles W. Hull in the late '80s by using digital data to create the blueprints for a physical object. Using an early adapted version of 3D printing technology called stereolithography (SLA), Hull was able to use a laser to harden liquid resin as it drops in order to resemble a 3D object. Stereolithography is still used today to create a wide array of objects and is the most common type of 3D printing for devices that are sold commercially. While additive manufacturing technology has finally gotten to the point of being commercial to the average person, it continues to innovate the medical field.

Additive manufacturing in the medical field is expected to grow into a $21-billion dollar global industry by 2021. 3D Printing has also pushed the boundary to transcend the material. Currently, there are technologies that are able to print using plastic, resin, and even metal. These property changes are a crucial part of innovating the medical field. But what about its other usages? With such a wide array of functionality, 3D printing technology seems to be like a swiss-army knife that is only limited by the creativity of the user. 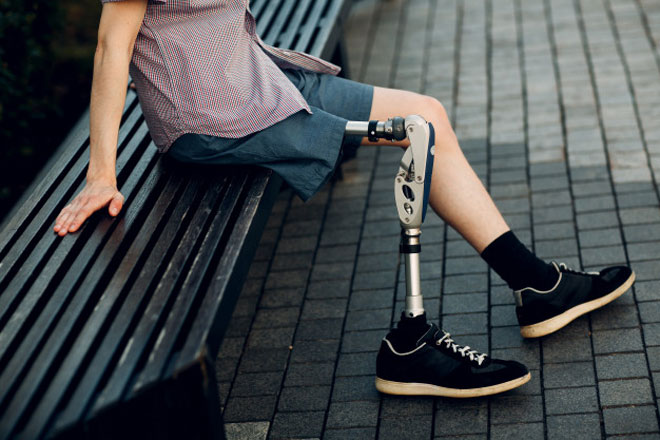 The usage of artificial body parts dates back to the Ancient Roman empire. One of the first documented cases of prosthetic limbs comes from General Marcus Sergius, who was given a prosthetic hand, fashioned from iron at the time. While we're not walking around with heavy replicas, our prosthesis has become much more sophisticated and customizable, especially with 3D printing technology.

Traditionally prostheses relied on the general size in order to fit their users. As we all know, there is not a one-size-fits-all type of solution to this problem, as everyone's body is unique.

That's where additive manufacturing comes into play. While taking scans of the body, they are able to digitally measure and produce the perfect sized prosthetic to fit your body. These tailor-made prosthetics can always be a guaranteed fit for their users since they use the exact measurements down to a tee.

On the contrary, this also means more general prosthetics can be mass-produced at a much lower cost than they are right now. The ability to completely materialize a prosthetic instead of having it be assembled from many different sources allows the production to go along much quicker. 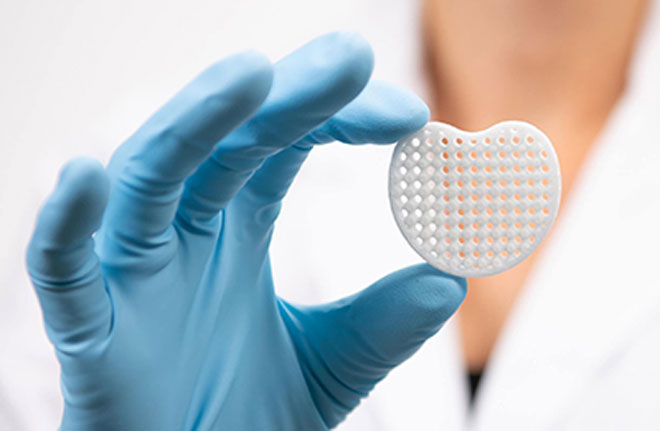 There are some pretty amazing things that can be done with additive manufacturing. As mentioned before, 3D Printing is able to create objects using different types of material; this includes Bioresorbable PLA-based polymers.

This bioresorbable material is very similar to the material that stitches are made out of and will dissolve the exact same way without human interference. This is a huge step in the right direction for specialized surgery. Most notably, reconstructive breast surgery benefits greatly from this.

By creating a specialized net of bioresorbable materials, breast implants that are netted in this bioresorbable polymer are able to break down weeks after the surgery safely. This eliminates the need to come back to the surgeon to remove said netting. With fewer operations having to be performed, the patient is at less risk for any complications that might be associated with removal. 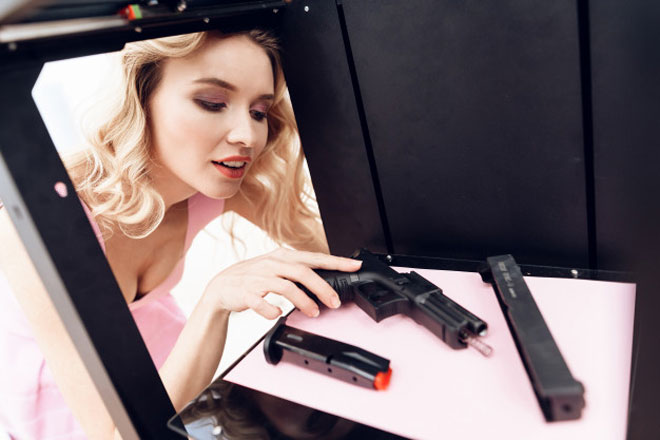 Not only can 3D printing produce prosthetic limbs, but it can also create the tools needed to conduct surgery as well. 3D Printing makes way for quick and effective manufacturing of the tools needed to operate with. These 3D printed surgical instruments can be produced rather quickly, taking anywhere from an hour to a couple of days for most instruments to be fully produced.

While that may seem like a long time, keep in mind that many of these surgical instruments are highly specific and cannot be bought unless from a hyper-specific vendor. Take into account how long processing, payment, and delivery takes, and 3D Printing your tools seems like a much faster and viable way to attain your medical goods. 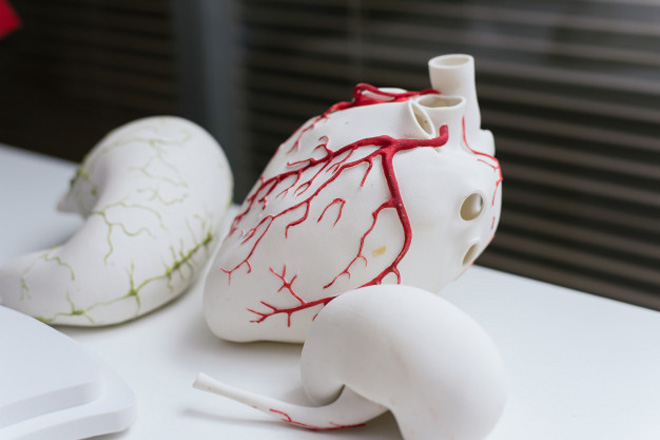 Replicas can be used to advance the medical field. Instead of practicing on models, doctors are able to train for their specific surgery with 3D scanned organs. These proxy organs can have the exact same features as the one that is being operated on. While being fully transparent and a 100% replica of the patient's organ, doctors are able to gain great insight and quantitative feedback on any abnormalities before actually performing the surgery.

These tangible objects are not only beneficial for doctors, but also for medical students in training.

Tattoo artists in training often practice their art on either honeydew melons or pigskin, which emulates how the ink will settle on human skin. This is probably the best-case scenario, or else there would be a lot of human guinea pigs walking around with terrible tattoos for the rest of their lives.

Medical students don't have the same kind of luxury, as you can't perform open-heart surgery on a melon. Most students would have to practice on real-life cadavers that were donated. Body donors are often sporadic and you can never assure how many subjects you will be able to take in per school, class, or even year. With shortages and ethical problems on the line, this is not a completely reliable source.

3D Printing is bridging the gap between education and real-life applications in the field of surgery. While not 100% spot on, these replicas are extremely convincing and are able to even emulate the elasticity of flesh. Before anyone gets any real-world experience, these highly detailed and lifelike replicas can be used to practice while not putting any humans at risk. 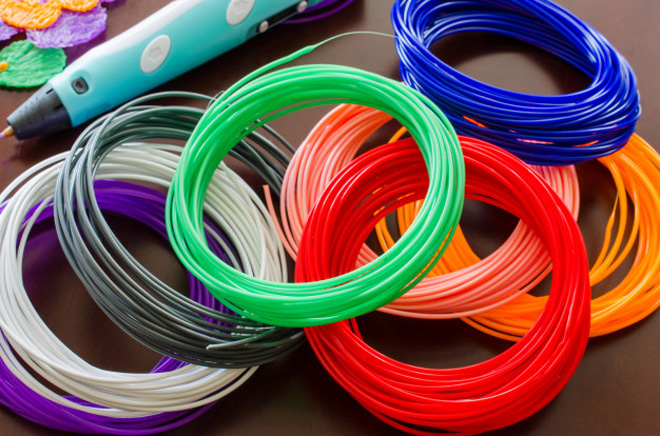 Besides the initial purchase of the 3D printer, most objects can be produced for relatively cheap depending on the material used. The term "cheap," being used in the loosest of sense, as materials printed with 3D printers are by no means inexpensive, but rather cost less than their original alternatives.

Unfortunately, 3D printers in their current stage lack large support from third-party manufacturers to cut the cost of their consumable. The 3D printer that you buy is often tied directly to the original resin/powder cartridges that you are forced to use.

Depending on the brand, 3D printer powder can cost hundreds of dollars per pound. Seems crazy, right? What if I told you that some original ink cartridges charge up to $60 for 70 ml of ink. With a few simple conversions, we can calculate that those same cartridges can cost around $390 per pound.

Printer ink and resin for 3D printers are both fairly expensive at this point. Luckily, you don't need to waste absurd amounts of money on original ink cartridges. 1ink.com has hundreds of ink cartridges that fit any make and model of inkjet or laser printer. Serving the community for over 20 years and counting, we provide affordable ink cartridges that can cost up to 80% less than the original cartridges. Our easy Quick Ink Finder tool located on our website will direct you to the exact ink cartridge that will work with your home printer.

As additive manufacturing has seen a massive surge within the past decade, our legislature in the U.S. is having a hard time defining and regulating the method. With the Federal Drug Administration having a hold of most regulatory processes, they have a very loose grasp on 3D printing in the medical realm.

The FDA does not view 3D printers as medical devices, but rather as a means of production.

This viewpoint completely absolves the 3D printer of any issues related to medical malpractice. As for the FDA regulations, it's not particularly the 3D printers that are being subject to these standards, but rather the software that is used to communicate with the 3D printer.

In addition to the software regulations, the material used in the printer is also regulated. That being either resin or powder that is used as a consumable.

While additive manufacturing is still fairly new in terms of real-world medical applications, what's to stop someone from administering or selling their own 3D printed medical item? That's where the law gets a little bit hazy; these untouched waters bring up a lot of ethical and moral debates.

The current climate of additive manufacturing regulation is murky and often varies on a case by case basis. 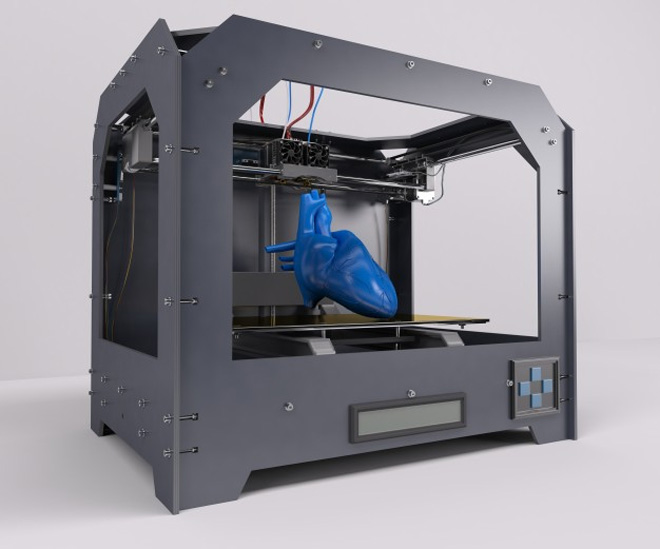 This one sounds straight out of a sci-fi movie, but it is practical and has the potential to save millions of lives in the near future. While still in its infant form, the ability to print human ears using a synthetic material that emulates skin is already being clinically tested. This lays down the groundwork for the future of 3D printing organs.

But there are still major roadblocks in the way before 3D printed organs can be used practically on humans. This includes the body's ability to fight back when it detects a foreign object. Although a 3D printed heart may look and fit exactly the same way as the previous one did, the synthetic material used may trip off the body's immune system, which has the potential to be deadly. While building organs with domestic cells directly from a patient seems to be the logical next step, there is still much more testing that needs to be done before widely adopted usage.

The benefits from the advancement of 3D additive manufacturing are exciting, as it can change the landscape of humans forever. Much like the advancements in medicine before, these 3D printed assets can potentially add years onto the life of every person in the future. While there's still a long way to go in perfecting the art of 3D printing, the steps being taken right now are revolutionary and necessary for the practical progression of the medium.