Welcome to Printer Wars, the online review series that compares similar printers and tells you which one is the better pick. Today we have the battle of the ink tank printers. What are ink tank printers? In simple terms, they're inkjet printers that omit the usage of ink cartridges in favor of refillable reservoir tanks. While the concept is not new what so ever, companies like Canon and Epson have been capitalizing on the general hatred of expensive ink cartridges by supplying consumers with an originally manufactured alternative.

In the right corner, we have the Canon MegaTank series, the newest inkjet tank printer on the market that boasts high-volume and low printing costs. Designed from the get-go with the latest refinements from the tank printer industry, this affordable option sets the bar high for an entry-level tank printer.

In the left corner, we have the Epson EcoTank series, the original tank printer with around five years of experience and fine-tuning. This Epson inkjet printer has brand loyalty and recognition that comes with being an innovator. With a slightly more professional demeanor and higher-priced entry fee, can the original champion keep his belt?

Both brands have similar offerings in terms of concept, but which one is worthy of your dollar? 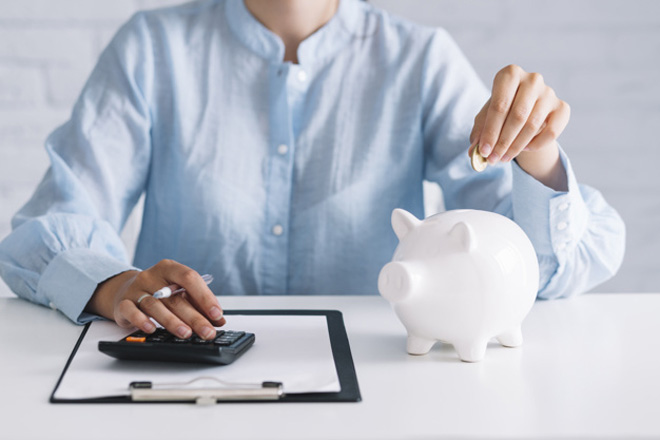 The Canon MegaTank's price ranges anywhere from around $150 to $300. This series really does make it accessible to dive right into the world of ink tank printers. Unlike higher-end laser printers with costly entrance fees, the MegaTank boasts an easy consumer experience straight out of the box. Equipped with an ink bottle set and two bonus black ink bottles, this offering seems like a fantastic starting point for those looking to try out the technology.

Epson Ecotank, on the other hand, has a much higher entry fee. With their EcoTank printers ranging anywhere from $199 to $599 for the standard models and $799 to $1,229 for their Pro models, they seem to be going for a more professional demographic. Not only are their printers built differently, but their presentation and slick design portrait a high-end offering, especially for an ink tank printer. Right out of the box, the EcoTank includes four EcoTank bottles, including a pigment-based black and dye-based magenta, cyan, and yellow. 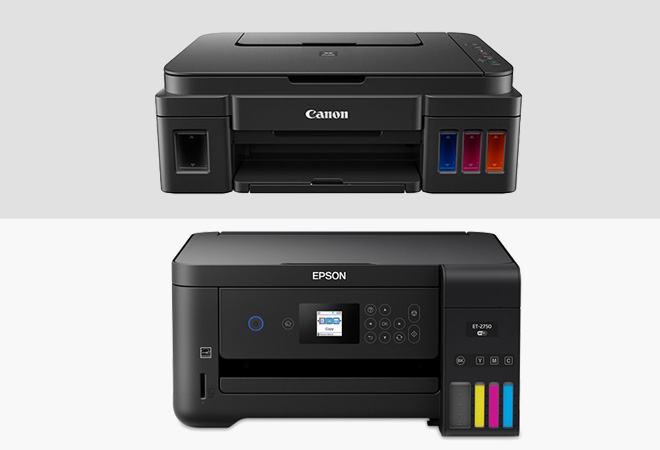 While the EcoTank and the MegaTank both succeed at the same kind of cartridge-free printing, their designs and builds cannot be any more different.

Canon MegaTank can cut costs by omitting key functional points such as an LCD panel. There doesn't seem to be any sort of display for the PIXMA G1200, G2200, and the G3200, but rather a small set of necessary command buttons. Granted, these are the first three iterations of the MegaTank brand. Future models like the PIXMA G4210 to the G7020 include a minimalistic display. I used the term minimalist in the loosest of terms, as the display is akin to the screen of a Nokia brick phone from the early 2000s. This uncolored display shows just enough information to tell the user what function they are currently trying to perform.

The Epson EcoTank, on the other hand, boasts a slick full-colored LCD panel on all of its models, including its first iteration, the Epson ET-4550, which came out three years before the first MegaTank model. The 2.4" LCD display will let you preview your pages and photos without having to put your computer on. This is a huge feature that should be standard for all printers in this era; the accessibility of printing is opened up immensely. A larger LCD screen also means a more defined and clear user interface, which clearly labels all the menus and options available from the start menu.

However, both models do have a similar visible ink level display. With the ink levels being displayed front and center on both the Epson EcoTank and Canon MegaTank. From a design standpoint, it really accentuates the fact that these printers do not use ink cartridges.

That being said, both Canon and Epson seem to exaggerate the colors that are displayed from the tanks on all of their promotional material. The bright yellows and magenta being displayed from the advertisements are heavily muted through the visible display. While this is just a cosmetic gripe and does not affect the design of either printer, it seems like a point of contention with disappointed aesthetic enthusiasts.

The Epson EcoTank uses pigment-based ink for its black bottles, while the colored ink uses dye-based ink. What they boast is "2 years of ink out of the box", which roughly translates to 2 Sets of Black, Cyan, Magenta, and Yellow Epson 502 ink refill bottles. However, the ink only lasts two years if you abide by a strict 150 page limit per month.

This data really seems to be all over the place; the MegaTanks standard GI-20 Pigment based ink is cheaper than Epson EcoTank ink and also yields you significantly more pages. However, Canon MegaTank is slightly outperformed by Epson EcoTank when it comes to colored refill bottles.

The ultimate test of a printer's overall performance is the Cost-Per-Page analysis, which takes the number of pages divided by the price of the ink refill bottle to calculate how much each page really costs to print. Here is the data below. 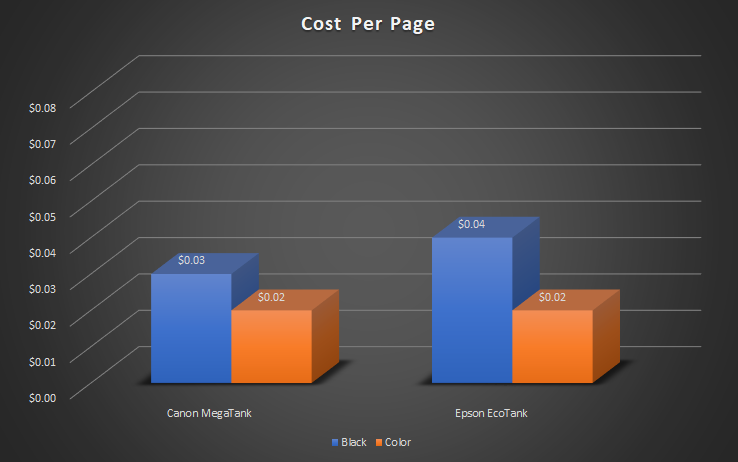 Only one standard ink refill bottle fits in the corresponding ink reservoir for both the MegaTank and EcoTank. Depending on how frequently you print, you may find yourself refilling the ink reservoir more often than not. 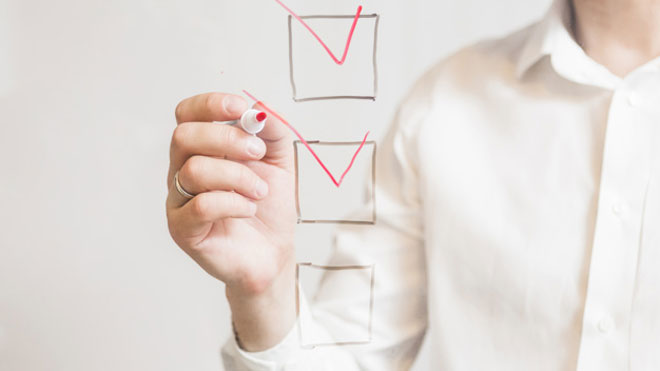 Besides the glaring feature of being an ink tank printer, both the MegaTank and EcoTank have a lot of extra features that come baked right in.

For starters, the similarities between the two consist of wireless printing through Google Cloud Print and AirPrint, which are Microsoft and Apple's respective most popular wireless printing conduits. They also share Copy / Scan abilities on all EcoTank and MegaTank except for the first two MegaTank iterations - the PIXMA G5020 and the PIXMA G1200. Auto Document Feeder and Faxing features are also included for the bulk of the models on this list.

The MegaTank does come from the same people who produced the  PIXMA line of printers, which were notorious for bringing professional quality photo prints into your home on a budget. The specs are wide-ranging but usually lay around 5760 by 1440 as an average optimized DPI with most MegaTank printers. The same optimized DPI resolution is also present in most EcoTank models, for the expectation of the EcoTank Pro models, which are slightly better in resolution overall.

Where the features start to differ is in their print speeds. Depending on how big your budget is, you could see amazing speeds from higher-end EcoTank models.

Some EcoTank Pro models can print over 25 monochrome pages per minute. For those looking to print photos in bulk, models such as the ET-58050 can print 4 x 6-inch borderless photos in around 10 seconds. The stunning photograph quality rival professional printing kiosks and deliver the same fine details you would expect from such.

There are a lot of high praises for the EcoTank Pro models of printers, but if we're talking about the price compared to the performance, the MegaTank is the real winner here. The MegaTank has very respectable printing speeds as well, with an average of around nine pages per minute in monochrome and about 60 seconds per 4 x 6-inch borderless full-color photo. For a quarter of the price of an EcoTank Pro model, the MegaTank is able to hold its own in the quality department. However, it may be generally slower in comparison.

The EcoTank seems to be a more fleshed out tank printer series in all. It has a sense of direction and a defined plan for the future of its products. With an approach that favors quality over affordability, this would be optimal for consumers that are looking for a one-time purchase.

The MegaTank, on the other hand, hits a lot of the same points as the EcoTank, yet its minimalist design and cut corners are on full display when comparing the two side by side.

Canon MegaTanks most expensive model costs around $299, which is considerably less than the price range that you can find most Epson EcoTank printers. You can potentially save around $1,000 when comparing these specific printers from Canon to Epson. The potential savings is worth noting alone. At the end of the day, the main selling feature of this printer is that it does not use consumable ink cartridges.

Both the $1,300 top of the line Epson EcoTank and the $199 entry-level Canon MegaTank omit the usage of ink cartridges in lieu of a tank system. Essentially, they are aiming at the same market.

Our verdict? It's really tough to call. For those who are more concerned about a powerful printer that doesn't use ink cartridges, the Epson EcoTank fits your bill. It does everything the Canon MegaTank series of printers can do, but slightly better. Granted, these EcoTanks can cost two to three times more than the MegaTanks do. You can check out our  discount Canon ink cartridges here.

Those concerned about saving money can be a little off-put by having to purchase a brand new printer in order to save money on ink cartridges. It is a really jarring issue, the main selling point of both the EcoTank and the MegaTank is the fact that it saves you money on ink. If saving money is your biggest concern, there's a much easier solution than purchasing a brand new printer.

Compatible printer ink cartridges exist for both Canon and Epson models of printers; these ink cartridges will work with your existing printer and provide you with high-quality ink for a fraction of the price of the original. Compatible ink cartridges are brand new and are specifically designed to fit inside of your printer, so there's no worry about them not working.

Here at 1ink.com, we've specialized in providing individuals and industry leaders alike with top-of-the-line ink cartridges for over 20 years. With a 1-Year Warranty and 100% guarantee on all of our products, you have nothing to lose by giving us a try.

Subcribe to our newsletter for the latest discount coupons!